Delhi is the capital of India and the home of executive, legislative, and judiciary branches of the Government of India. Delhi is a large metropolis. It’s the largest city in India in terms of geographical area – about 1,484 square kilometers. It has over 16 million habitants, making it the second most populous city in India and the third largest urban area in the world.

Delhi has been inhabited since the 6th century BC.Delhi is said to be one of the oldest existing cities in the world, along with Jerusalem and Varanasi. Legend estimates it to be over 5,000 years old. Over the millennia, Delhi is said to have been built and destroyed 11 times.  Through most of its history, Delhi has served as a capital of various kingdoms and empires. It has been captured, ransacked and rebuilt several times, particularly during the medieval period, and modern Delhi is a cluster of a number of cities spread across the metropolitan region. 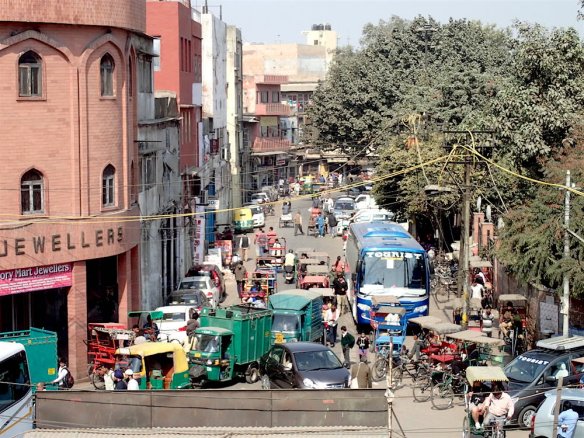 So as I said in my other post with my first impressions, I had bought a Golden Triangle Tour for 4 days. First day was in Delhi. We started out in the Old Delhi part, that’s of course the old part of Delhi, where the streets are narrow and crowded with people, stores, food. The houses feels like they are going to fall apart anytime, and some already have. It is very very dirty and dusty and there is literally trash everywhere. And sounds and smells. It was somehow nice to see some tourists there, like I’m not the only one here, haha. I’m surprised there are so many children walking by themselves there in the middle of the traffic. Like a bunch of 6 year-olds.

Here is a video I captured out from the window of our car, please take the minute to see:

–
We visited the Jama Masjid, is one of the largest mosques in India. It was built between 1644 and 1656 at a cost of 1 million rupees. I was surprised it was an open air mosque. The courtyard can accommodate more then 25.000 people. It is used everyday and we were the last ones to enter before the close for prayer (which they do about 5 times a day). It is constructed of red sandstone and white marble, has 3 gates and 4 towers. It’s free to go in, but if you want to bring your camera it costs 300 INR (about 4 euros/USD). From there you have a view over the Red fort. 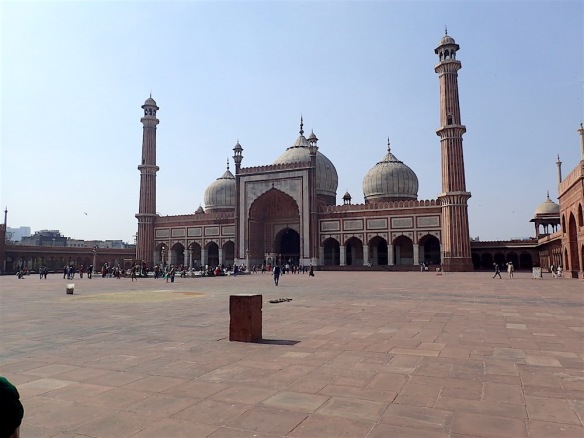 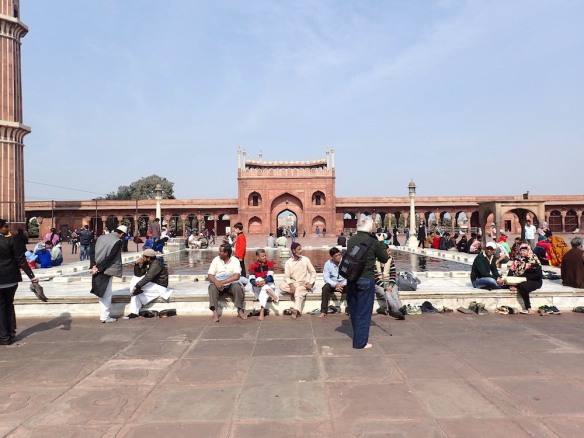 Muslims at the mosque Jama Masjid

Then we went to New Delhi, where we visited the India Gate. This monument has been built as a memorial for the Indian soldiers who died in World War I. There is also a fire (”eternal flame”) burning for all fallen Indian soldiers all year around.

While I was looking at it an indian couple asked me if I could take a picture, “yes sure!” I said, thinking that I was going to take the picture of them in front of the gate, but no, they meant take a picture with ME instead, haha. That was sweet and funny. I wish I had taken a picture of them too, they were so sweet. :) 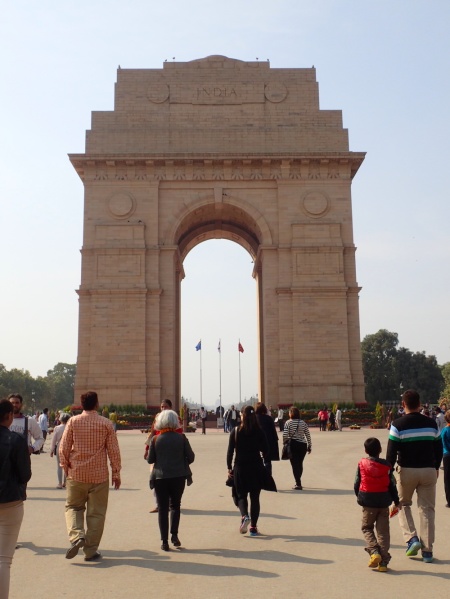 We visited the Raj Ghat, it’s a memorial to Mahatma Ghandi, he was cremated on this place. Mahatma Gandhi (1869 – 1948) was the leader of the Indian independence movement in British-ruled India. Gandhi led India to independence and inspired movements for civil rights and freedom across the world employing nonviolent protests like hunger strike etc.

Soni, the guide, said he liked this park very much because it’s green and beautiful and fresh. It’s really like any other park for me, except for that Ghandi is cremated there, but I understand it’s very special to have a green peaceful area in Delhi for them. It’s not very common. 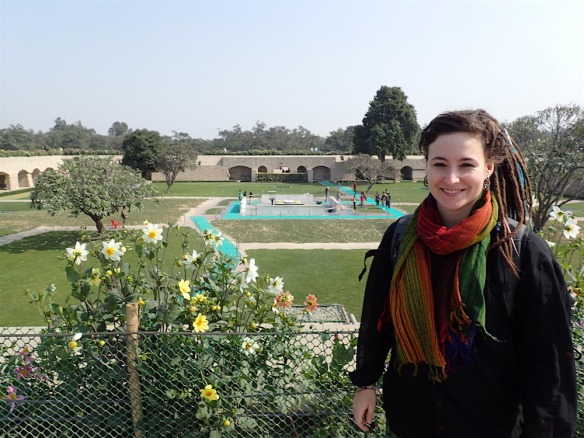 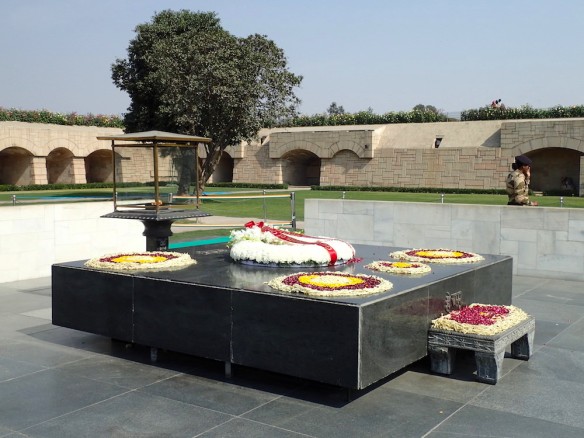 Ghandis memorial stone where he was cremated

When we got out of the park it was super crowded outside, apparently there was a protest going on. It was packed with nurses and doctors, and a man had a speech there with a monophone, there were tv-cameras and the police and everything. Apparently the government haven’t paid the nurses their wage in 3 months!!! “Because there are not enough funds for it”…Poor them! The medical care is free in India. I don’t think so much people pay taxes here, only the legit businesses, but I wonder what the government really does with the money, since there is no street that is clean or even complete. 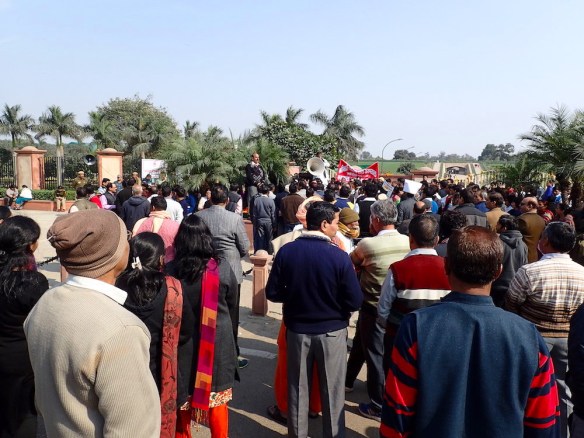 Anyhow, took a while to get out of there with the car since it was packed. Then we went to have some lunch, but we had to wait a little to get a table, and meanwhile, I hanged out with a man who played the flute for his snakes. He had a cobra and a boa snake, which I got around my neck and got to chill with them. It was a little bit scary “they don’t bite!” yeah sure… ;) Haha, but it was an experience! 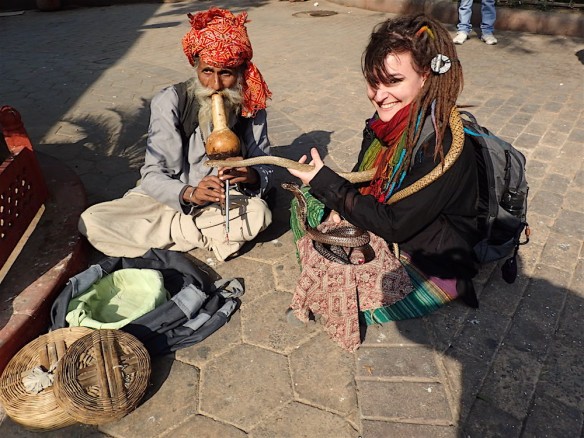 Me making aquiantences with a cobra and another snake

We had lunch at a restaurant called Pindis. the guide said it is very famous because it’s good northern indian food. For starters they always have like tapas of onion marinated in vinegar, which you eat with mint sause, and then picel which is quite a salty snack. For the meal we had mixed vegetables, paakak panir (panir and spinach), chana nasala (chick peas), garlic naan (indian bread), raita (yoghurt sas). It was really delicious.

I’m so happy about all the vegetarian food here, the menu always contains a whole vegetarian side. About 70% of the indian population are vegetarians. So it’s really no problem for me here, I can just point on something and say “vegetarian?” and if they say yes, it really is. I’m not going to find a bit of ham or tuna or something there. Such a relief!

After the meal we had some anis and sugarcane, apparently that’s something you always have after the meal. Our waiter was Indian, but he really looked Japanese. He is from the side of india close to china. Apparently there are many different looks here in India, in some part of India they are whiter than me. That’s one thing TV doesn’t show ;) 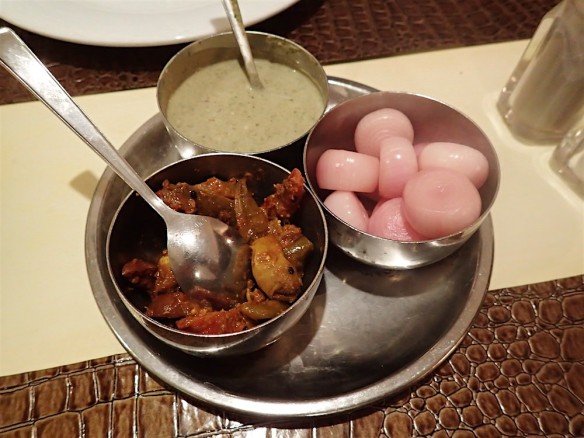 Some Indian tapas. Onion with vinegar, mint sause and some salty something 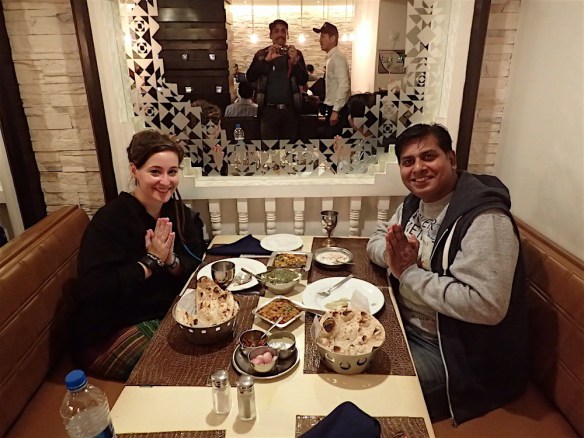 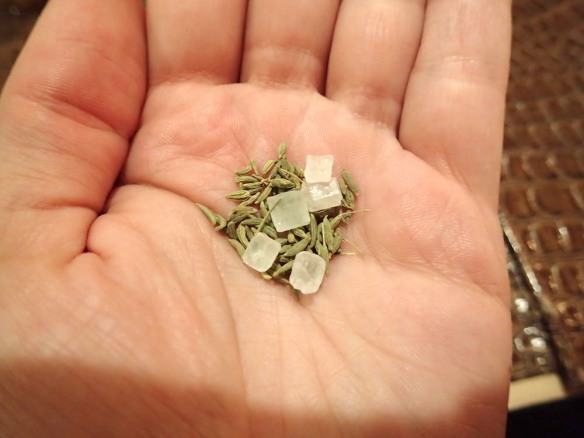 The ”shot” you take after have eaten

One thing I found weird, that was not mentioned, is that I had to pay the whole thing, the guide didn’t say anything about sharing the costs, just the food. Maybe that’s something you do if you have a guide, don’t know..

The cost was about 1700 INR, which to me sounded quite expensive for being India, but it was my first meal here and it wasn’t that much for 2 people compared to Indian restaurants in Sweden. (Note: a couple of days later I definitely noted that was an very very expensive restaurant. Good quality meals are around 3-500 rupees.) Also since I’m not a very big eater, it was more than half of what we had ordered left after both of us had eating, so I got it in a doggybag to bring home for dinner. You can always ask for a doggybag here if you leave food. That is great and common! :)

After lunch we went to see the big Bahá’í Lotus Temple, it’s shaped like a lotus bud with 27 petals, it’s really stunning, probably one of the most magnificent monuments ever made from concrete. We didn’t go in because it was a very very long cue and I’ve also heard there is very little to see inside. It’s nice because all the religions are welcome there. 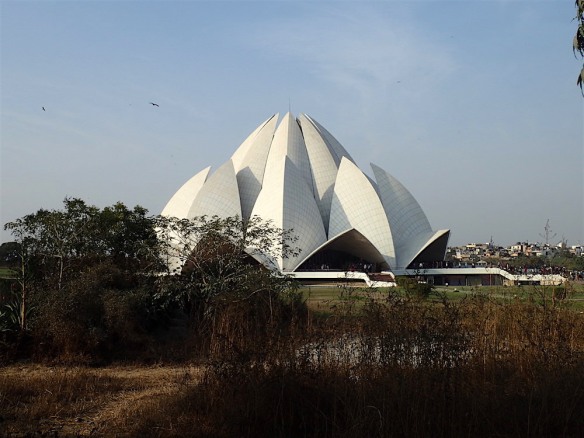 Then we went to a fabric industry, where they have many many fabrics of all kinds and sell to other stores. I started looking at some stuff, they sell tunica, scarf and pants all together for 1500-3000 INR (around 20-40euros). Since I’m not that into sparkling things I had a cheaper one, very good quality. Then I saw some harem pants that I had to buy. And then they let me try some Saris on, and one of them was beautiful, made of silk.. it was 5000 INR (65 euros)… VERY expensive but beautiful. They also sewed up a matching blouse to it after my measurements and delivered it to the hotel later (!). Then they wanted to sell me more scarfs but I said stop, I can’t buy more, they tried and tried to make me buy more but no haha. I had already spent my whole weekly budget only on this day. Damn India and all those nice colors and damn me for being a stupid tourist. But I’m not regretting buying anything, that’s good ;) 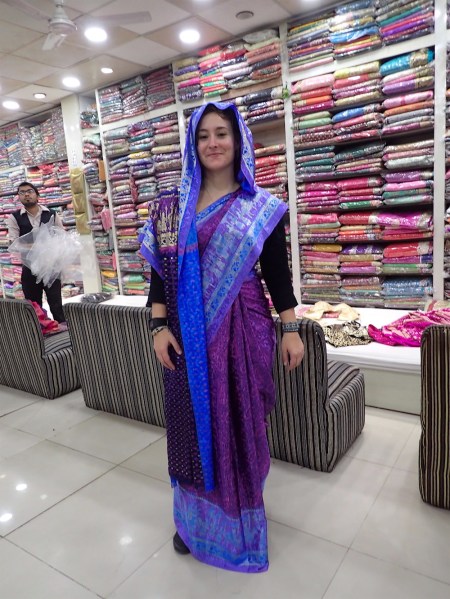 Me in my sari

After that we visited yet another house, actually looking for a silver pendant to my necklace collection (I have one pendant from every country I visited), but they didn’t have any tiny silver pendants. Instead I ended up buying some really nice scarfs made of silk, cashmere and cotton. One is really cool with “windows” in it, the attendant told me “This is a mix of silk and cotton, you see the windows here are in silk and the rest is a mix, it’s completely unique here in India because it’s an invention of my family”… What? Your family? Ok, give me one! Haha. (Had not learned to say no to pretty things here yet). I also bought a handpainted elephant. They always offer you some tea or something to drink, and they are really good sellers, let you sit on a bench and they show you different fabrics and things.. It’s hard to not buy anything, you feel a little bit of obligation too... and now I can’t fit everything well in my backpack. It fits, but it’s messy. 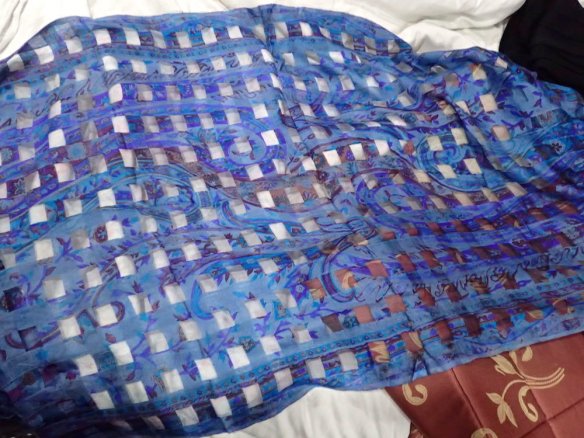 My scarf with windows in silk and with handprinted colours 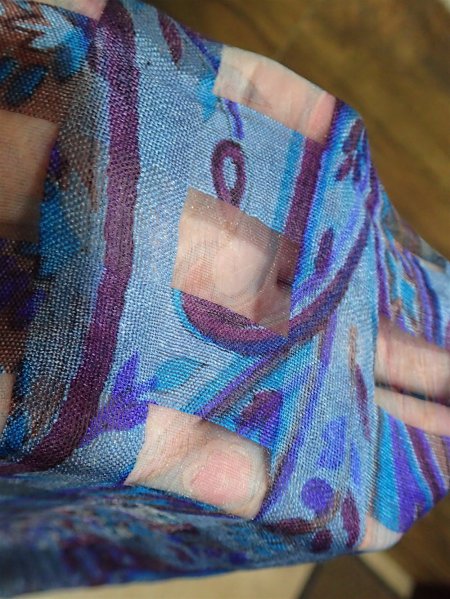 Close up of the scarf

Around 8pm we were done and I finally did the check in at the hotel. It’s called Omega residency. It was a nice double room, but it was quite moisty and a little cold due to that. I didn’t get any towels either, even though it looked like a really fancy room. Only one of three power outlets working, so I put everything to charge through the computer, had a shower, ate my doggybag and chatted a bit with my boyfriend and mum. I had wifi :) 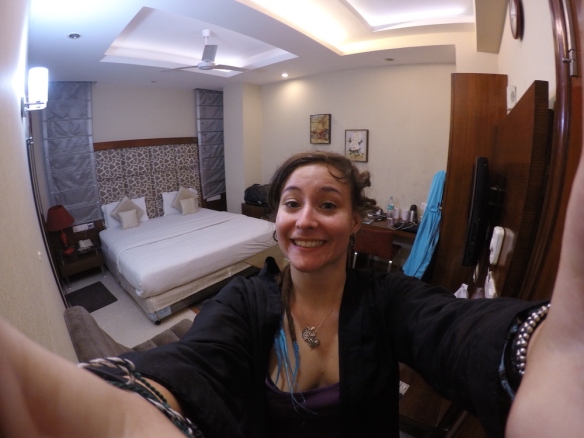 Finally in my hotel room!

So yes, this first days have made a quite big impact on me, it’s a lot to take in, but I could probably manage myself here after a while. It reminds me a lot of the chaos I saw in some places in Peru and Bolivia, the difference is that I don’t understand any Hindi or know how the customs work here.

Then I finally went to sleep. About 20 minutes after I fell asleep, the reception called my room and said that my sari had arrived, haha. Then I fell asleep again. Ahhh :) 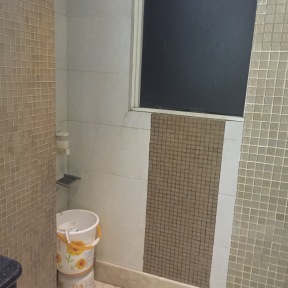 My bathroom at Omega… 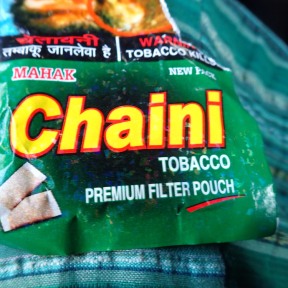 They have snus in India!! Chaini snus!! 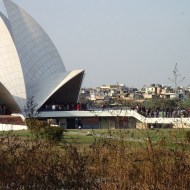 Cute to the lotus temple 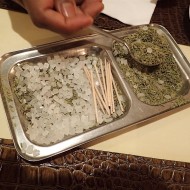 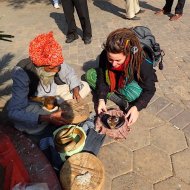 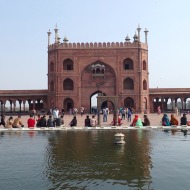 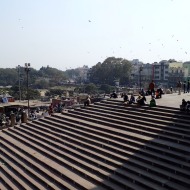 The stairs from the mosque looking out over the city 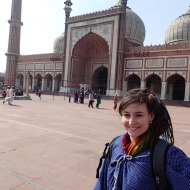 Me in front of Jama Masjid, with the complimentary robe they give 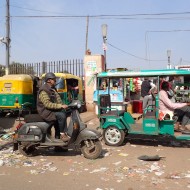 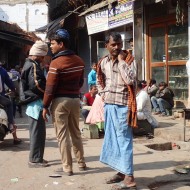 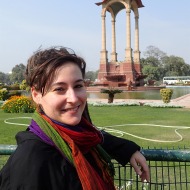