Right now I’m in Tupiza in our hotel Anexo Mitru. I’ve shared a private twin room with Anne from Germany.. We were supposed to get picked up at 8.30 by Tupiza Tours, to start our Salt Flakes tour, but apparently the other two that are going with us are late, the train they are on are delayed so… we’ll be picked up around 11.30 instead. Typical!

But then I have time to write this ;)

We arrived here yesterday. We all met in La Quiaca, the border town of the Argentinian side. We arrived like 7 in the morning and it was still dark and freezing cold, and it was such a heavy atmosphere there, I really felt uncomfortable.. and there was no info what so ever about where the border was or how to cross it.. and the tourist information was closed.. it was really weird.. I spotted a couple that I saw in Salta, that took the same bus as me. They also felt the strange feeling there and were also going to take the train to Tupiza. The border didn’t open until 8 so we started to talk there.. and then 3 other people joined us that they had been talking to before too, so we were a group of 6 people together going to the same place and it felt much safer to walk around there. It’s really nasty and doesn’t feel safe to walk there by yourself. Also it’s quite far away from the bus station to the border. 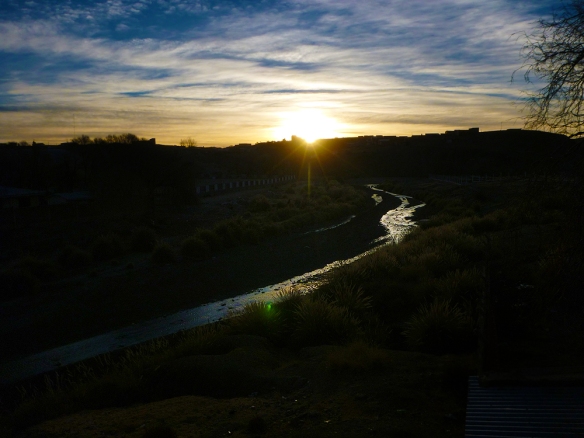 Sunrise in the border between Argentina and Bolivia. The river is the border.

We crossed the border without problems and landed in the border town Villazon in Bolivia. A little better atmosphere, maybe because the sun actually had come out and made it a little bit more friendly but I still had this molding feeling inside of me, I wasn’t comfortable.

Then they tell us that there is no train to Tupiza, that it doesn’t go anymore… whaaat? Haha. Some of us even stayed an extra day in Salta just to catch this train since it only goes 4 times a week… but they were buses leaving in the morning, good! Buuut… then there is a traffic stop or something right before Tupiza, so the buses didn’t leave either!
….whaaaat again?? Haha.. We didn’t want to be stuck in that town! Such a bad luck. We waited a little bit and then they said that the buses actually were going to leave, but a little bit later.. phew! We met some other people waiting there and had some breakfast (coffee and plain bread, they didn’t have anything else). Nice to get together with all these other backpackers actually, it felt so much safe.

Breakfast in Villazón in Bolivia, the border town… so cold here.. and they only had coffe and bread.. :) This is Sarah, Matt and Anne!

Then we took the bus to Tupiza (15 Bs), and it was actually really quick! And the bus was totally ok, I mean is not the kind of bus as in Argentina or Peru, a little bit more broke, but still ok comfortable ;) When we arrived in Tupiza it was totally a different atmosphere, so much lighter, and it felt much better. We walked to Hotel Mitru which we all had seen in hostelworld, they had rooms for 100 bs at night, but they also have 2 other hotels close by where it’s cheaper, so we stayed at Anexo Mitru for 60 bs at night, private room. :)

Then we had some lunch, took out money and paid for our Salt Flakes tour (1200 bs with discount), then went back to the hotel to chill a little and take a shower. In the evening we went out to buy some more clothes, I bought a pair of gloves and a hat because it’s really damn cold here. Then we had something to drink at a coffee/restaurant place in the main square of tupiza, it took like 40 minutes to get our coffee, beer, submarino and fanta, haha.

I really enjoy the company of Anne, Sarah and Matt, they are funny and easy going, and I feel better at heart when I’m around people I enjoy and not alone with my thoughts. After that we had dinner at a place called something Antomos or something, ”it’s recoginized by it’s green light outside” as it sais in the lonely planet book haha. Really funny place, they have sliding doors and a private security guard outside haha. The menu was great too, really cheep and they have all kind of different food, even vegetarian hamburger, which I ate! And the decorations in that place is really funny too. :) 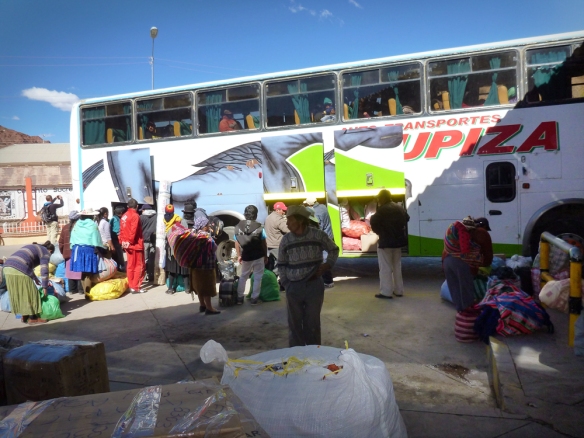 Finally in Tupiza! The busstation. 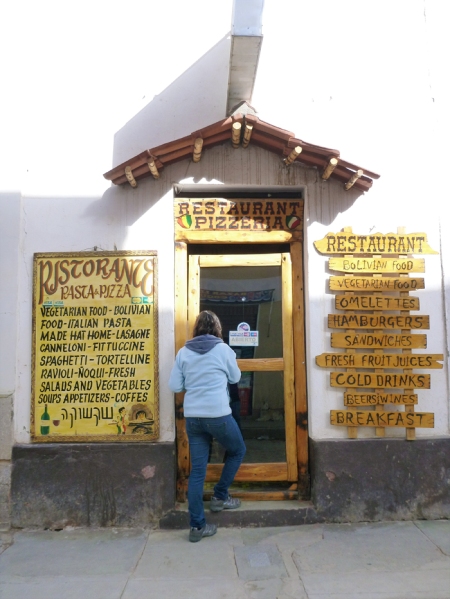 Ate lunch here, they had plenty of vegetarian food. But then when we walked around town we noticed that they are like 5 other restaurants that look the same that also serves vegetarian food! :) Great! 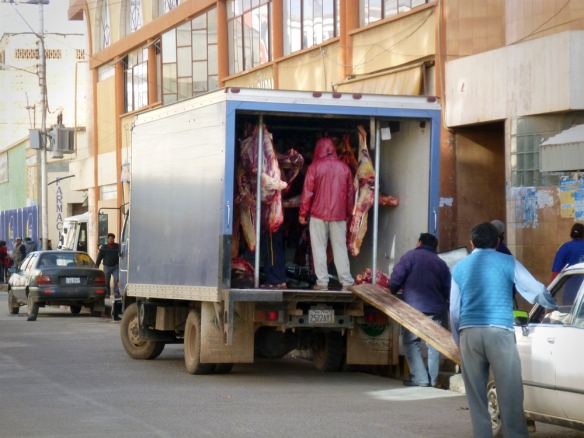 Having dinner at a really good place in Tupiza, called something the Antomos or something like that…

At night we were all dead and went back early to the hotel, I tried to skype with Duilio allthough the internet connection is really bad here so it was hanging up all the time. But still I told him that I had reservated an apartment for us in Santa Fe from the 15th of July, and he just couldn’t believe that, he was so happy to hear that and I was so happy to hear his voice all that happy :) Haha. It really felt great. Looking forward to it, less then a month left ;);)

So… soon time to leave for the Salt Flakes Tour! I’m actually a little bit excited about it, it feels good to have that feeling in the body again, excitement for traveling. :)

I’m so glad I’m doing this with Anne and not alone too. It feels good to have travel company :) We will be staying at basic lodges with no electricity or hot water... and at night it’s below freezing point.. uffuff. Maybe I should have bought another warm sweater.. I’m really something in between if I should or shouldn’t… Hopefully I don’t regret not buying one, haha.

The pink route is our tour, the 4 day salt flakes tour. We are going to see some amazing things!