Me and Jill had to wake up early to go to the tour to Maras and Moray..

It really started well (not) – the bus was parked at a plaza where we were standing in line to go up, when the tourleader say that the police is right behind the bus and since they aren’t allowed to park in the plaza the bus had to move, but only half of the group was inside the bus, the other half of the group starts to run after the bus, but then the bus accelerates and leaves and we don’t understand anything… we stay there waiting like idiots for the bus to come back like half an hour. Then when we finally get on the bus, the bus is overcrowded so there aren’t enough seats for everyone – Jill had to seat back in the bus and I had to sit in front with the driver, and I don’t see the guide when he points at things that we are passing.. Just hear him back there somewhere.. and I fall asleep instead.. Haha. 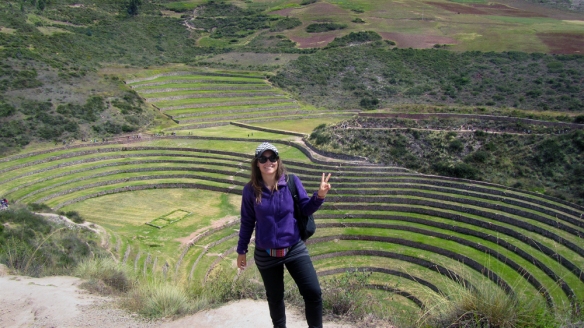 Me in front of Moray – which was used in agricultural purpose

Outside Moray, so beautiful.

Me and Jill in the Salineras :)

We visited some different archeological sites and some indigenous villages. First we went to Moray, which was used for agriculture purpose, it has platforms in a circular form with different levels and climates, so there can be about 15 degrees Celsius (60F) between the top and the bottom, so they can grow all kind of things – potatoes that grows best in higher colder altitude to vegetables that grows best in lower and warmer temperatures. Smart!

Then we went to the Salineras in Maras, a lot of small salt mines, it has been used since the Inkas, they used it like money and trade it for other products. Really cool!
We also visited a small village where a woman told us about how they dye their wool and stuff, and everything in English!! I was so surprised – never heard someone from a small village speak English fluently. She was also really funny, made us laugh a lot.

The woman here at the left told us about their work in English :)

It was interesting but the tour was really bad organized, really! When we got home we where sooo tired, slept a good siesta.

In the evening I met up with Rafael and played bingo in the bar, we were hoping to win something but we didn’t.. But I really had a nice evening with Rafael, eating potato chips, really dark chocolate and talking about everything in life, from work, animals, travels, love, brazil… he showed me a lot about his city (Porto Alegre) and I’m definitively going to visit him when I go to brazil : ) Sadly he was leaving next day to go back home.. it’s aaalways going to be like this for me, huh? When I find someone I really like to hang out with, they have to leave… Well well. When he went to get his stuff packed I joined the Pariwana team for the pub quiz – and we actually won the quiz! Woho :)

Next morning I had breakfast with Rafael before he left for his flight, and I went for a Sacred Valley tour, and wow, this was really good and well-organized!! Interesting sites.

We started with the Pisac village where we visited a traditional market, then we visited the ruins in Pisac there, great views over the andeans (platforms) and the valley. It was really fun to walk around in the temples and residences there, but I got so lost and couldn’t find my way out, haha. Finally I did though, but I came late to the our meeting time with the group, haha.

The food market in Pisac. Peru has around 4000 different types of potatoes… these are just a few of them.

The market of Pisac

Temples and residences in Pisac

Panorama from the temples over Pisac

After that we went to Urubamba and had lunch, but I didn’t want to pay 25-35 soles for a meal, I already had my avocado sandwiches with me, so I sat down in the sun and had my picnics alone. The driver got me desserts from two different buffet places where the other had eaten while i ate my sandwiches i brought haha.  And he also gave me water. So sweet!

Having my avocado sandwich :) Also showing of my new bracelet I bought in the market of Pisac, with the colors of Cusco :) (the nametag-thing is from the hostal)

After that we visited Ollantaytambo and the ruins there, where ruins I ran into Nadja and Facu from the hostal! So funny, small world! Ollantaytambo also have really cool Inca constructions, with a temple of the sun made of really big blocks of rock from the mountains in the surroundings. Not only the closest one, because it has different colours, so it’s taken from different mountains in the Sacred Valley, which they have brought there… It must have been so damn hard, they really weren’t lazy those Incas.

On our way back we stopped at Chincheros and visited another village there with different families, sort of had the same talk like yesterday (and in mexico) about how they colour their wool and stuff, but this one was in Quechua instead of English.. but this woman had the same joke as the woman yesterday, even if it’s totally different villages and people… Do they know each other? Has a guide that has visited both villages told one woman about that joke and she copied it? I have no idea.. I just found it a little rare…

Chinchero, the only inca site with regular houses above, because the Spanish destroyed the old ruins and built new houses above… 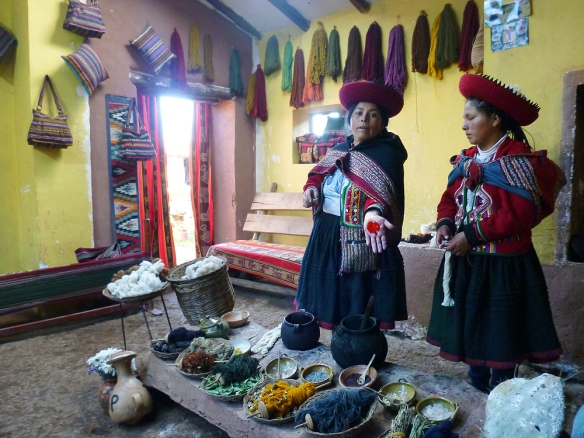 The woman in Chinchero showing how they make the red colour

Anyhow, this was a great tour compared to the one yesterday, I noticed how important it is that the guide is organized and informs us about everything – this guide told us in the bus where we were heading, when we were going to be there and what we were going to do there and when we arrived he told us where the meeting place was after the guided tour and what time we should be there.. we had nothing of this yesterday, we just went to a place, entered, walked around without knowing anything about what it was until  the guide started screaming ”hey! the group of Roberto- come here!” – and people where at the toilet, or in a souvenir place, or in totally different places in the archeological site, sort of chaos.. (don’t remember the tour guides name, it’s probably not Roberto)

Anyhow.. I got exactly back to Cuzco in time for the pre meeting with info about the inka trail at 18.30. Met two of the girls that are in the same group as me, two Danish girls. At night we had some Kareoke night at Pariwana, and then I went to sleep earlish. 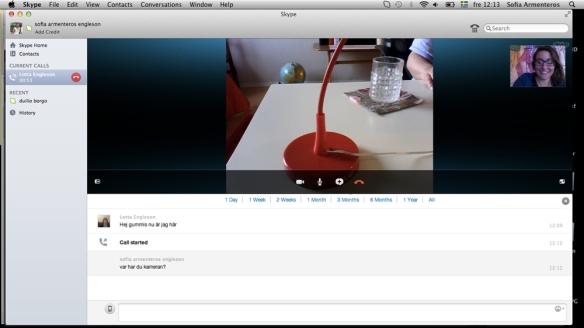 Skypetalk with my mother… so much fun to see her again! :P

Next day, Friday, was chill out and planning day. I skyped with my mother (for the first time, she is so funny and sometimes it surprises me how un-technical she is, haha!). I also skyped with Duilio (for the thousand time)… Can’t believe I only have the Inka Trail left now, then I’ll be heading to Argentina!!! I’ve been counting the days, and now it’s only 5 days left!!! The day after arriving to Machu Picchu I’m flying to Buenos Aires. I feel like a child looking forward to Christmas. So damn happy.

In the afternoon I prepared for the inka trail, bought a headlight, cereal bars and repacked my stuff… I’m going to have my backpack but I’m leaving some stuff at the hostal.. still quite heavy and big though! But it’s going to be around 0 degrees Celsius at night so I need to bring all my warm clothes – and they take some space. I have really been thinking about what to bring, so let’s hope I don’t have too much or to less stuff with me! I’ll let you know! 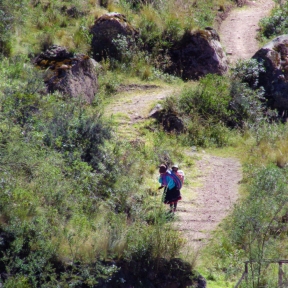 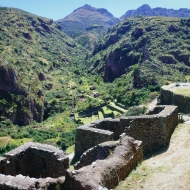 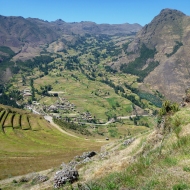 View from the temples in Pisac

In the ruins of Pisac 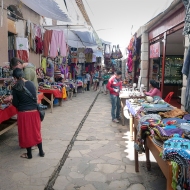 The market in Pisac

Some lamas and all the countries flags. The gay flag is not a gay flag – it’s cuscos flag. 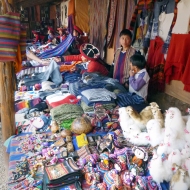 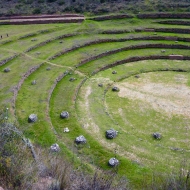 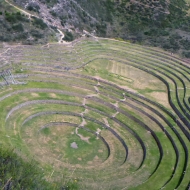 Salineras – lot’s of salt mines – used since the inkas! 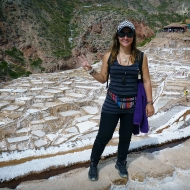 Me in front of the Salineras :) 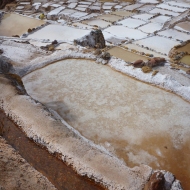 You see the small ”river” here closest to the lower left corner, it’s really salt water which they pore down to small pools with the small canals (you see a closed one in the lower right corner) 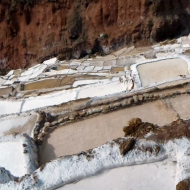 Panorama over the salineras, lots of small salt mines!