Arrived at Cuzco like 6am in the morning, I directly felt good when I bargained down the cab from 8 soles to 5 too, haha. I went to the hare Krishna temple, as Krishna Govinda had told me to, but he wasn’t there. Luckily they go up like 4 am in the morning to go to the temple so someone was awake. He said that everybody was at another temple on the weekends, and wouldn’t come back until next day or the day after that.. Well.. So I was in an empty big room with mattrasses on the floors, the mother’s room.. and there was another couchsurfer there, haha, weird. I didn’t have any mattress so I borrowed one for the night… but still.. I didn’t really feel comfortable.

My first room in the hare krishna tempel…

The toilets was downstairs, the shower was a stockholm-toilet as we say, a very small space where the shower is above the toilet sit, so not really a shower… , no hot water, no internet.. I felt kind of lost there in a room filled with stuff everywhere but no one was there. I met up with Jill, who I met in Ica and couchsurfed together. We had breakfast at a place in the same street where the temple is, quite expensive but really delicious. We talked a lot about everything, so much fun to catch up with her! After that we went around for a while, visiting small shops and markets (lovely shoes!), the 12th stone and Plaza de armas. It’s beautiful! Cuzco was the capital of the Inka empire and everything here has a lot of history. 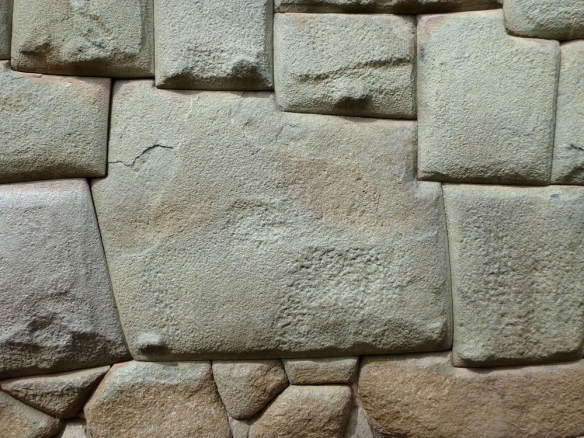 The famous stone with 12 corners!

Panorama over the main square in cuzco 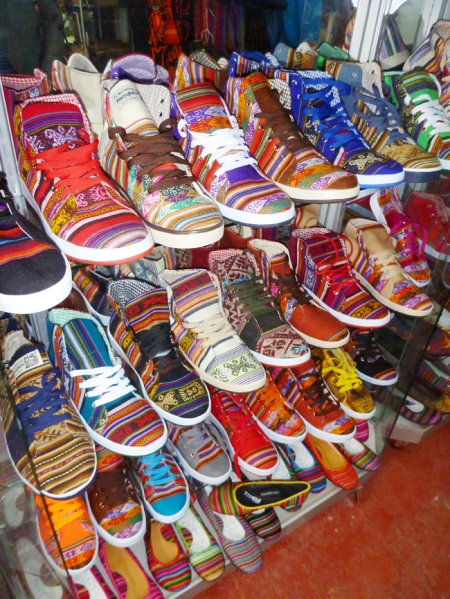 I went with her to her hostel where she works and lives, and wow, such a good vibe there!! 26 soles a night… good beeds… big patio with ping pong table and puffs.. bar and restaurant.. movie room.. internet everywhere… hot water :) Haha. I will stay one night at the temple since I already have all my stuff there but I will move later.

Jill went to sleep a siesta and I went back, met up with to german couchsurfers that also where staying at the temple, they were going out for a walk in Cuzco to some ruins, so I joined them. We walked up to the surrounding hills (damn it so many stairs, I’m in such a bad shape… and this is like 3400 metres above sea level, so you really notice it!) and passed by the Cristo Blanco and the Saksaywaman ruins. Usually you have to pay to go close there but you can also get the back way in just to visit the area.

Two woman looking out over Cuzco

Lot of people out camping, eating and playing games in the fields

I guess it’s because it was Sunday, but there were tons of people there in the fields, I think all the Peruvians go there with they kids and families and camp during the weekends. We found some really cool temples around there, it’s so weird, I really don’t understand how the inkas could do this stuff, cut the stones like this.. and why. It’s totally impressive. We stayed there and meditated for a while before heading back in the last hours of sun.

A big stone where a couple is sitting comfortable… 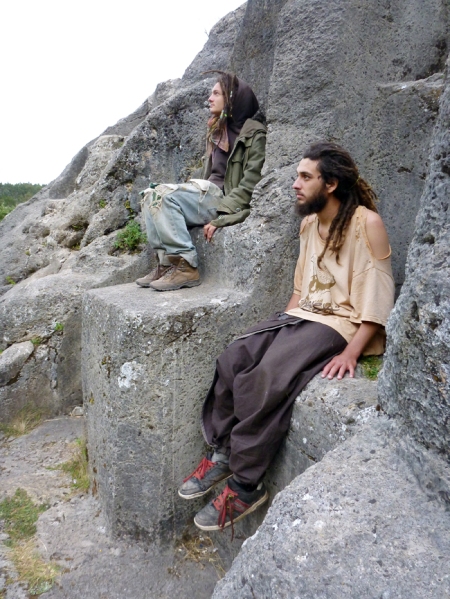 Meditating a bit on the rock. Weird formations.. how did they cut these??

Two girls out with their Llamas

Then I was really hungry because I had forgotten to eat lunch… I went directly to Pariwana hostel where Jill lives, because they were going to have a BBQ this night, and vegetarian : ) It was delicious!! Definitively one of the best bbq food I’ve ever had… so tasty. It was filmnight and we watched a movie in the bar too.. great.

Then I was so tired so I was on my way home, when I met Carla! We both couchsurfed at Kevins place in Arequipa.. haha. Small world! So we started talking and then she introduced me to Mitchell and Rafael from Brazil, and we kept talking for hours.. haha. A little bit funny because the only one of us 4 that actually was staying at the hostal was Rafael, the rest of us was just hanging out and visiting friends :P I had such a funny night.. sometimes you meet people that just makes you laugh all the time – and Michell is like that.. we had such a fun group dynamic, making fun of Carlas “fuegito” haha.. so many intern jokes already, haha.

Group pic at the hostal!

So I got back home around 1.30 or something, and guess what – the temple was closed! I was knocked on the door but nothing… I stood there outside for a few minutes thinking about what I should do when I heard a noise inside, someone went to the toilet – hallelujah for not having toilets in the rooms – and he opened up to me haha. Went to sleep with all the clothes I could put on, since it’s around 5 degrees Celsius at night..

Woke up next day and moved to the Pariwana hostel. Got breakfast that morning! The breakfast is until 12, so good! Haha. Best hostal I’ve been too…. Guess what – the lockers have chargers inside!!!! Such a great idea… and every bed has two pillows!! And a duvet!!! I LOVE THAT!! Another detail: the shower has a bathroom mat!! How wonderful is that… small things that makes you happy while traveling.. hehe. They also have free tea 24hours a day… great for the cold nights. :)

And my new room. Love my bed… I have my methods to have privacy ;)

Me and Jill went to the San Pedro Market and bought some fruits and stuff, I bought a tomato salsa that didn’t have a price – apparently it costed 15 soles!!!! (5-6 usd) Damn expensive.. when you can eat a menu here (first and second course) for 5 soles.. damn it.

Anyhow.. I went to look for Bamba Experience, which is the company that I have booked the Inka Trail with through Green Toad.. it was just around the courner from Pariwana : ) I went there to say that I’m vegetarian, so they would provide me with vegetarian food during the trail… and guess who I bump into – Michell from yesterday! Haha… small world again! He was also changing hostal, and the hostal where Bamba has their office was full, so he changed to Pariwana hostal where I’m staying too. :)

Hanging out at the Pariwana bar.. :)

At night the hostal arranged salsa night, we learnt the basics.. it was fun to dance a little bit, but difficult since I was dancing with other beginners, haha. At night we finally decided to go out (we were about to stay inside to watch a movie) ..on our way out from the hostel we met a whole other bunch of people going out, so we all joined together.. around 15 people from our hostal :) Went to mama Africa, where we also bumped into Carla again : )
Next day in the morning (ok, around 11) Michell woke me up to say goodbye, he was leaving for lima and then heading up to Colombia.. too sad.. :(

The pariwana-gang at Mama Africa! 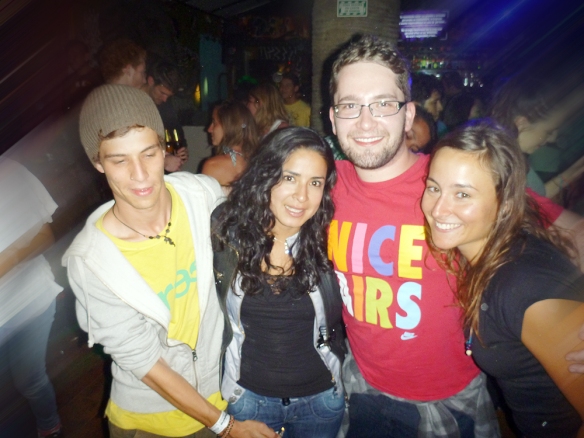 Michell, Carla, Rafael and me… best gang. Carla is on fire! (look what michell has in his hand… haha)

After that me and Jill went out to buy a tour for tomorrow, we asked at one place and they said 30 soles, but we got it at another place for 20 ;) Then I bought some new shoes for me and Duilio and the rest of the day we just hang out at the hostal.. Love to do nothing! Haha. Just hang out, eat, have internet.. hehe. At night we played some beer-games (ping pong things and stuff.. our team was the worst, haha, but it was fun :) Later we went out to a called 7 angelitos where a tribute band to rolling stones played.

Shoes for me and Duilio ;)

Facu, Nadia, Jorge and Shir cooking in the kitchen 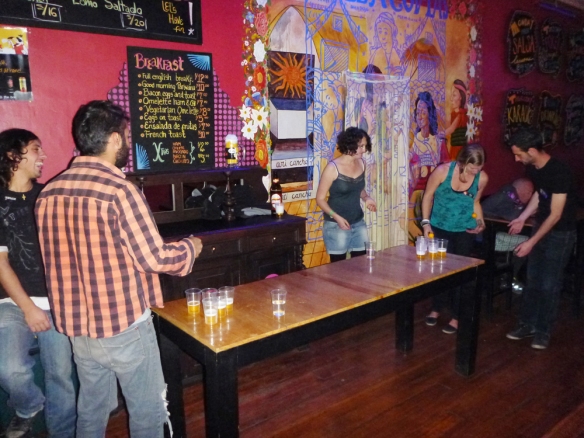 We were a whole group from Pariwana hostal again, but this time with almost everyone that works there, so no more sad good byes for a while,  at least that’s what I thought, but of course the guy I hang out with the most leaves next day too…. Damn it.. always happens to me! So it’s me, Jill, Shir from Israel, David from Spain and the rest are from Argentina.. Yep.. those Argentinians are everywhere!

After 7 angelitos we went out dancing at mythology and mama Africa, but it wasn’t the same good vibe as before, we went home around 3 or something. 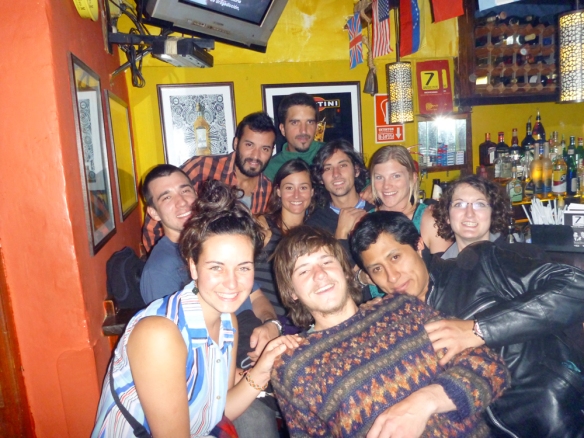 The market… love it!

The yard at the hare krishna temple.. down there is the toilet.. haha

Pointing at where we live… I think haha

A street down to the town

Some show at the main square

View over the valley 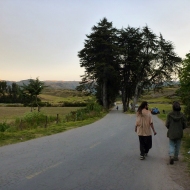 On our way back to town

loads of people in front of the cathedral 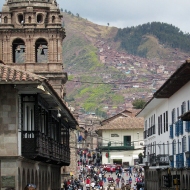 Main square .. always some show going on on sundays 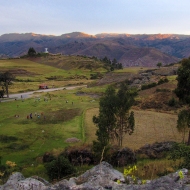 love that the sun is hitting the mountains far away

At night in the small pittoresque streets of Cuzco 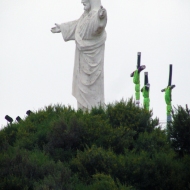 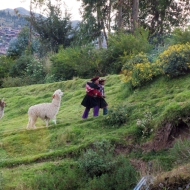 Two girls out with their Llamas 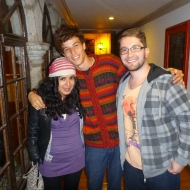 With Carla from Peru, which I met in Arequipa and Michell and Rafael from Brazil 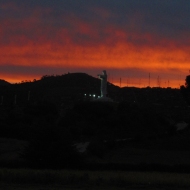 The white christ in the sunset

This is also a way to fix a toilet…

Haha.. couldn’t help my self, I walked with all these handsome macho guys to the bar together, while the girls took a cab later. Felt quite safe ;)

Panorama over the main square in Cuzco 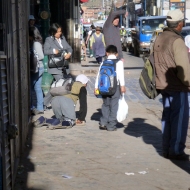 I feel so bad when I see this. Disabled people that can’t afford a proper wheelchair or crutches, instead have to crawl on the streets with homemade scate-things for the feet and protection for the hands. 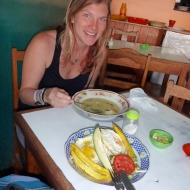 1 thought on “First days in Cuzco”