Me and German arrived late in the evening, had some thé and nice conversations, and then he left for his village while I stayed with Pedro and Julia, their daughter Rosa and her daughter Fatima.

The family was lovely and made me feel like their daughter in one sec. And they had such a beautiful house. I had my own room with bathroom and hot water and everything, so nice! Btw, the key ring to the room was a Dalahäst, typical from Dalarna in Sweden, haha so fun.

Panorama view from their house over the whole village

Canocota is a small village north east of Chivay, it only lives around 50-80 families there, the village is only one street with houses. Canocota belonged to the Kollawas.. There are two different kind of  cultures here in the Colca Valley, the Kollawas or the Cabanas. The kollawas are generally shorter then the cabanas and Pedro, as the man in the family use to say “El frio no nos deja crecer” – The cold doesn’t allow them to grow.. haha.

They speak Quechua here, the native south American language.. and it’s so cute because when Julia speaks Spanish, she speaks with a Quechuan accent, so the “c” sounds like “ch”. : ) 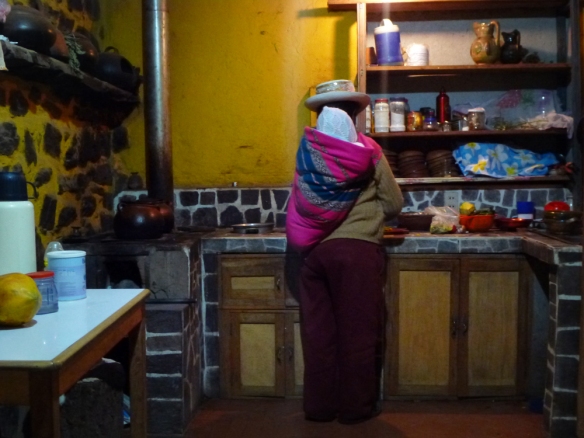 Cooking dinner with Fatima on her back. :) 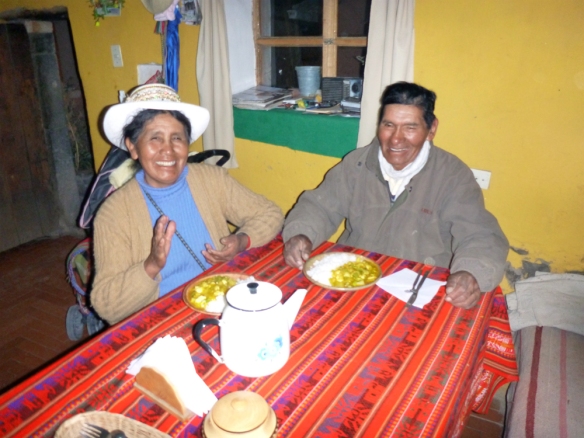 Dinnertime with Pedro and Julia. So sweeeet!

To dinner they made me a great Quinoa soup.. wow, so good really.. we sat in the kitchen and talked for an hour or so about their village and the life there. Since the kitchen is used with fire, the kitchen is warm and cozy, but also I got really tired so I went to bed around 20.30 and fell into deep sleep under 5 blankets in my bed made of adobe : )  We decided to have breakfast around 7 next day, because Julia and Pedro wakes up 4, but that’s a little bit to early for me! Haha.

Lovely breakfast with home made EVERYTHING! Yummy!

They almost always eat what they grow themselves.. but they need some money to buy sugar and rice for example.  What’s good with Canocota is that everything here is totally ecological, they don’t use chemicals or pesticides for the gardening at all.

After breakfast me and Julia went to visit some of the farms they have, one with the quinoa, where they have problems with birds eating it up, so they have put a lot of bags there to try to scare them away. I asked why they didn’t have a scarecrow and Julia said that she had one before, but one night she had forgot about it herself and got o afraid of it that it almost cost it her life. : ( 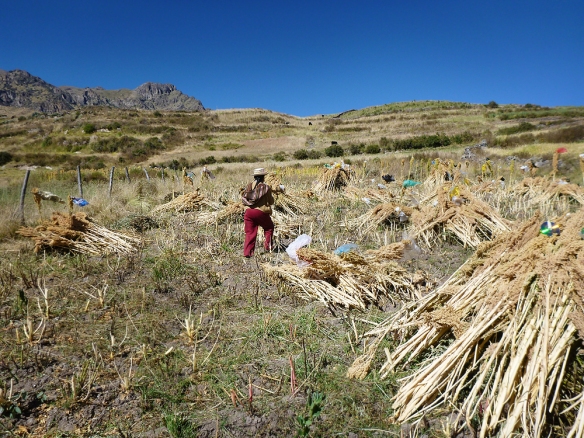 We also went to another farm a little bit more far away and on our way there we passed by another abandoned farms of other farmers that either have died or left the town for other bigger villages/cities… to sad. Since they didn’t sell the farm to anyone, just abandoned them, they are now to difficult and overgrown to do something about it.. You would need to move the whole ground upside down to be able to grow something there again, and when I asked why they didn’t do it, she said that it’s impossible to reach those places with a tractor.  They could bring some horses and other tools to do it too, but it costs quite much. In Canocota they almost don’t have any animals, just a few sheep, donkeys, cows and cuys..  but generally they grow barley and that kind of stuff.

Anyhow.. we walked over some hills and valleys in the area until we got to their last farm where we cut some “grass” (don´t know what type…) and brought it back to the house. It was the first time I wore something on my back with a Aguayo (the blanket they use instead of backpacks). They wear everything in it, grocearies, the harvest, babies… and it’s quite comfortable! You can fit almost everything there and your hands are totally free. It feels like it’s going to fall of but it doesn’t :)  By the way, on our way back home, while resting a little bit, Julia sang a song for me in Quechua, soo sweet! I should have recorded it :) 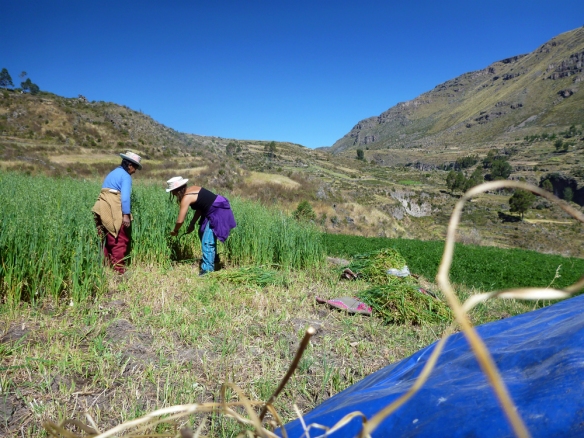 Working out on the farm 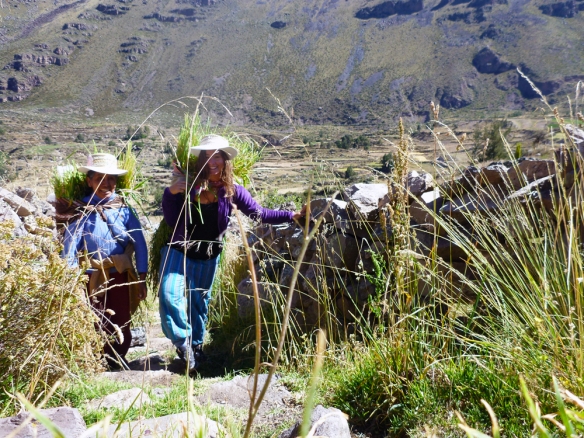 Walking back to the house with our harvest on our backs :) 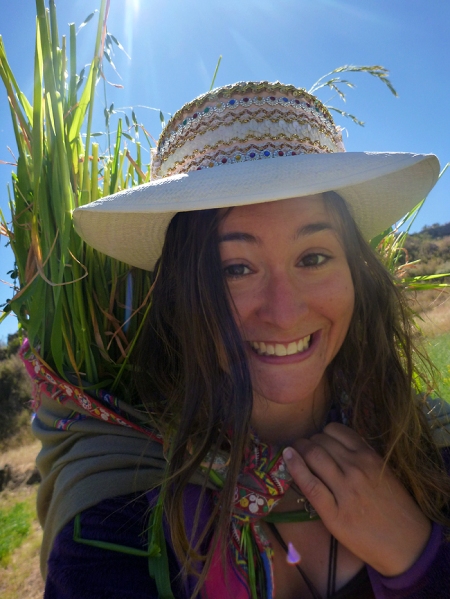 Me wearing the aguayo for the first time :) 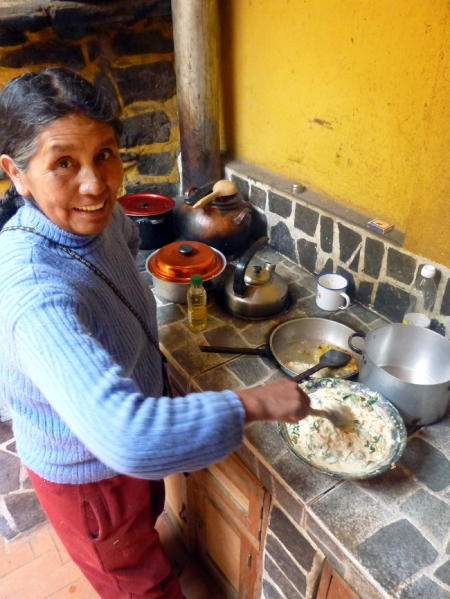 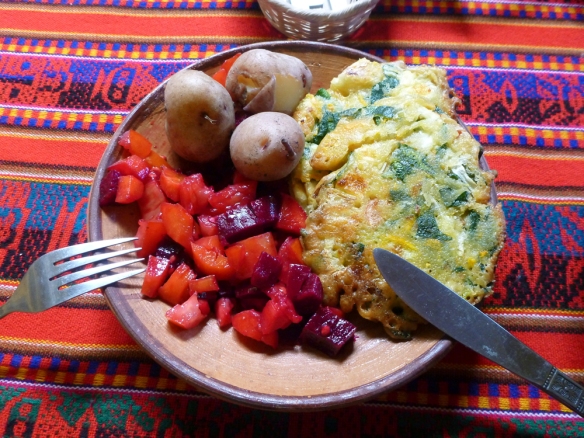 The lunch… soo goood… everything also taken from the garden/farm.. :)

For lunch we prepared some reaaaaaally gooooood omellette-thingy… I mean… it was DELICIOUS!!!! I have seriously not eaten anything like this before.  It was funny to help Julia in the kitchen :)

She is a little sad though that her house and her Chacras (farms) also are going to be empty and abandoned when she’s gone. Her children have their own house in other villages, and no one wants to buy a house in Canocota.  It’s so sad to hear that.
Another problem is also that when they get too old, they can’t maintain the same lifestyle as now when they are farmers.. that’s why they have started to do this rural tourism thing now too, it costs around 50 soles at night there with 3 meals. Then they can save a little bit for when they are old and can’t work anymore, so that they can buy their grocearies in the store instead.. 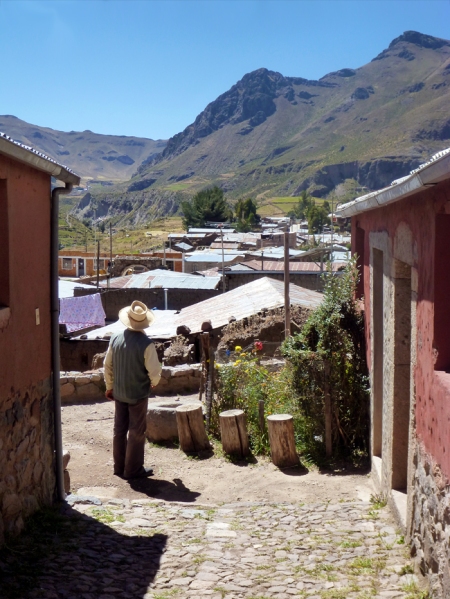 Another thing that stroke me is that this people that lives like this in the villages, don’t have any insurance at all. When they get sick, they can’t turn to a hospital, because it costs to much for them, even the consult is to much. If they need a operation, just by going to Arequipa and do the first tests is more than they can afford, and they don’t have any money left for the actual operation.

But Julia told me about another kind of “hospital” where  she had been when she had problems with the liver and needed to operate it. The consult cost 15 soles and the operation 25 soles, but it’s not a regular hospital, it’s a religious thing. They let all the patients sit on chairs and then they put all the lights out so everything is totally dark. They are 3 men that starts to pray and call the apostles and then you hear them arrive and everything. And there in the dark, they talk to you and do the operation somehow, but they don’t use any tools or anything, but after it’s done, you have a scar and everything.. It sounds magical and insane at the same time. Apparently the state is against this kind of “events” and says it’s nonsense, but there are so many people that actually have been cured by this even when hospitals haven’t been able to, that they can’t shut it down. I’m glad that this does kind of hospitals exist if it means that it works for these families. 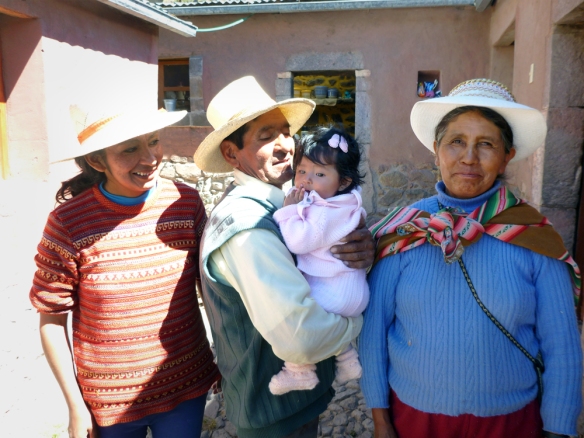 So.. yes, it has been an experience to be here. I’m so glad they open up they hearts and their home for me, it’s so interesting to hear all the kind of stories from here and to have a small insight in their way of living.

I, who in the beginning thought that 50 soles was expensive for living there with the families, now actually wants to give them 50 soles a night. If I have had more money with me I would have given them that too to help them… I wish I could have stayed there for a longer time. I will definitively come back!

If you are interested in visiting this family – let me know and I’ll give you their phone number!! You are always welcome and it’s totally worth it! 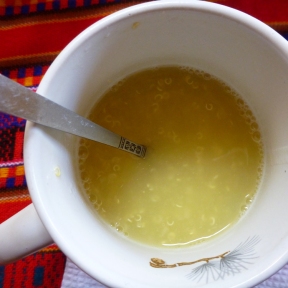 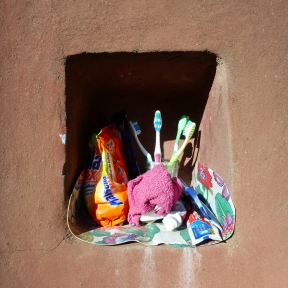 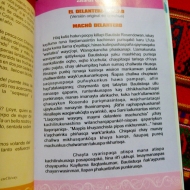 This is a story in Quechua. Haha. 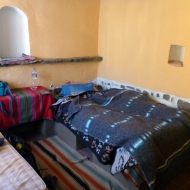 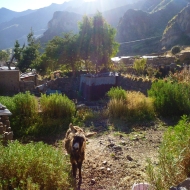 The donkey woke me up in the morning. Haha. 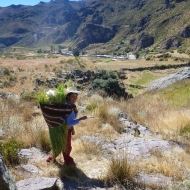 Out wandering in the fields of Colca 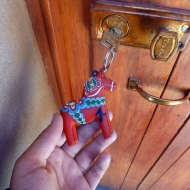 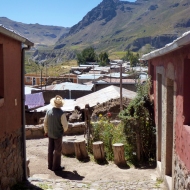 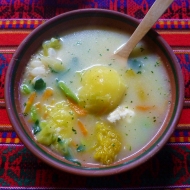 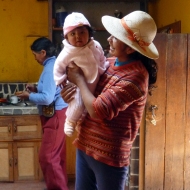 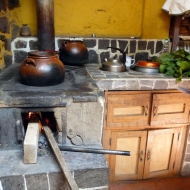 4 tankar på “Visiting a family in Canocota in Colca”