I arrived here at Eco Truly Park this Monday, but apparently their internet modem had just broke, haha, that’s why I haven’t updated anything.

But before telling you about this place, I would like to sum up my last two days in Lima.

On Saturday, me, Mari-Angeles and Anthony (all three of us staying at the same hostal) went to a birthday/welcome-party that was hosted by a guy from couchsurfing. When we arrived they had this CS-flag and they also gave us bracelets like the ones you get on festivals, it stood “Couchsurfing Lima Peru”, so cool. We had a big welcoming there, I don’t know how many we where but if I guess 40, then 10 of us were travelers and the rest from the couchsurfing community in Lima. Very well organized!

Group picture of everybody at the birthday party! And the Couchsurfing flag :)

I also experienced  ”la horaloca”, which means “the crazy hour”. It’s a typical thing to do here at Peruvians parties, they hire in 2 people that takes care of the crazy hour, dresses up (these ones were clowns) and then they make sure everybody have fun and are laughing their asses of during one hour, with help of balloons, confetti, spray, whistles etc. I had lots of crazy dance and dance trains! So much fun. Some people that we met up with yesterday at the football game was also at this party, it was nice to hang with them since we knew them from before. Because I promise, on my way from the dance floor to the toilet, I’m sure I talked to 7 different people, and everybody was asking the exact same questions. Where are you from, what are you doing here, how long are you going to be here, where have you been, where are you going, what do you think about this city, this country..and so on.  I got so tired and I felt so not interested to have conversations with anyone because I was tired of my story. I know those are the typical questions you ask someone you meet who is traveling, but I promise that if I’m at a party where there are other travelers, I will ask “What’s you favorite color??” instead. 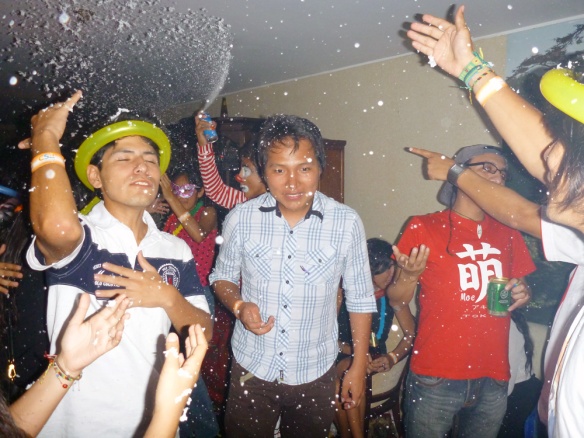 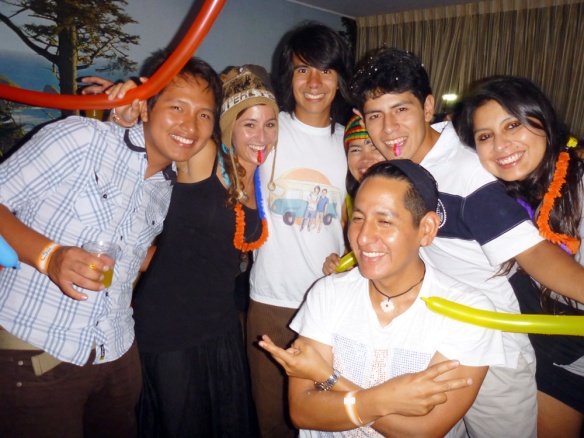 Our little group, everybody from yesterday too!

Next day I surfed in the morning and in the afternoon I went to a couchsurfingpicknick with Anthony, Samuel and Ronald in the Parque del Faro in Miraflores. We had such deep amazing talks about life, the future, travels etc. Wow. I love those talks. Besides, the malecón there above the cliffs is beautiful and since it was Sunday everybody was out walking around there. Very nice and friendly atmosphere. 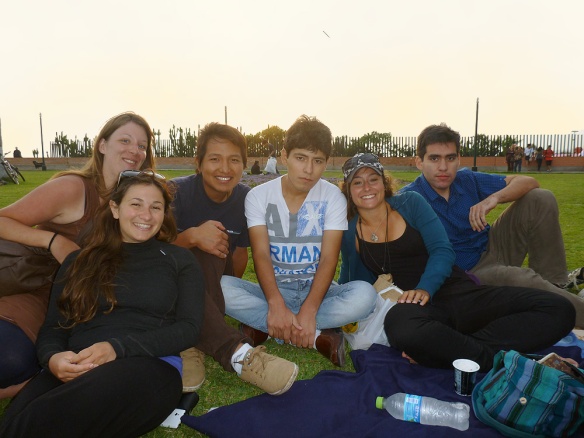 At night we just chilled at home (the hostal). Next day me and Anthony started doing some videos, he has a page on facebook (rodandosuenos) where he posts some videos, and he invited me to participate in one of those, where we talked about how comfortable we are at the hostal and about differences in our languages etc. Then we made some more videos, one with Elena from Spain, and with Marisol “our hostal mother”. I convinced Anthony to join me to Eco Truly Park too, so we had company there. : )

You can see the video we did in Lion Backpackers hostal in Anthonys page on facebook. https://www.facebook.com/rodandosuenos

We grabbed a cab for 18 soles from Miraflores to the Z-bus terminal, then took the bus to Huaral for 7 soles, which is one and a half hour from Lima. From sweating our asses of at the bus I started to get cold when we arrived, such a difference in temperature. And the surroundings here were amazing!!! Big big hills of sands, it’s like a mountain desert but with sea below… 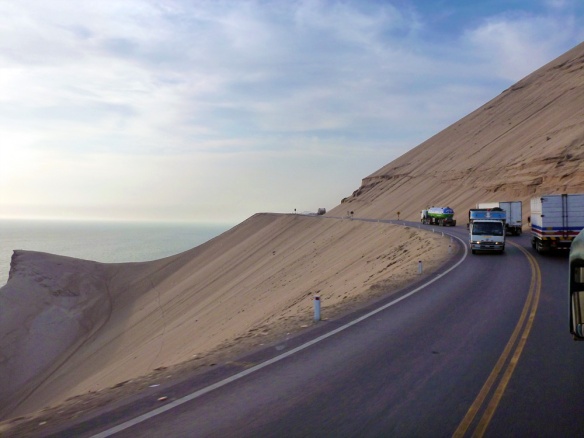 On our way to the north, close to Huaral 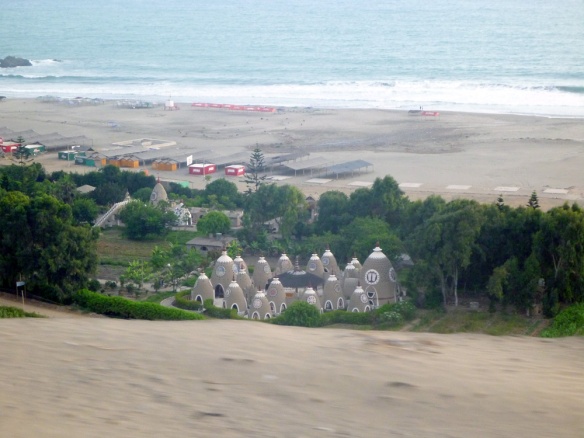 The Eco truly park seen from the bus! Amazing!

When we arrived at the park there wasn’t really anyone here to receive us, they said we could leave our stuff in a room and then take a walk around the park or join a music “workshop” in the yoga studio. So we did, and wow, it was really cool. I felt so relaxed. Then we had some dinner and then went to the temple, where they have this ceremony every evening. Some singing, dancing etc. We didn’t stay all the way, mainly because we felt a little bit uncomfortable with all this religious thing since we aren’t Hare Krishna, it just felt wrong. Oh yeah, I didn’t know they were Hare Krishna here, haha.
Later we went to bed, we got a room with two beds in one of the Trulys (apparently these “houses” that has this pointy shape is called truly). The madress was about 10 cm and it was wood under, but I slept really good anyways. 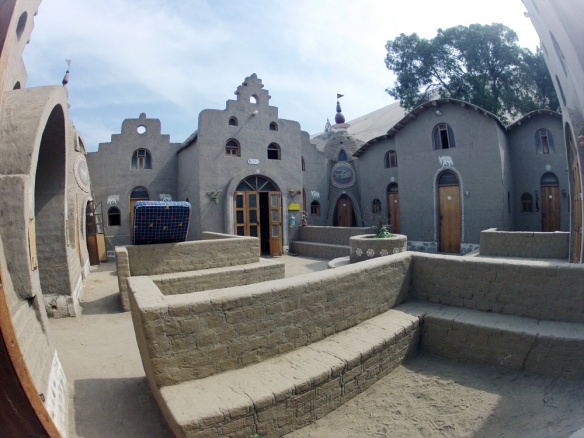 Our yard where we live

Love this mural about life!

Next day we had yoga and meditation at 7 for almost 2 hours. And wooow, I have never felt this relaxed!! The yoga was really relaxing but the meditation was fantastic. Can’t describe it, but I’ve never been this relaxed in my life. What a good way to start a morning!!! But not only that, we also had an amaziiing breakfast! Yummy! After that we got our workschedule, I helped out in the kitchen. It was quite meditating just to cut tomatoes, carrots, peel potatoes etc… but not so much fun. After around 4 hours of work we had lunch (yeah the one I helped with hehe) and then we had the afternoon off.

Me and Anthony made some more videos from Eco Truly park before he left to go back to Lima, tomorrow he is leaving for Chile. :( I’m sad, we have been hanging out for a while now and I really enjoy his company, we have lot’s of fun and great conversations. It always feels empty when someone you get a little bit closer to leaves. 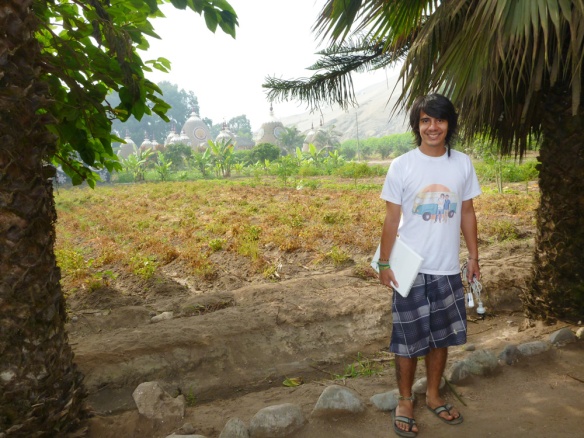 Anthony with his computer in front of one of the yards with the temple behind.

So after leaving Anthony by the bus station, me, Francesco and Ana (another Swedish girl) went into “town” to go to the internet café, mainly to tell people that I was alive. Apparently there has been wifi here in Eco  Truly but it has broken so it hasn’t been working for a couple of days. This town was not really what I call a town, it looked more like an abandoned houses, but we found the internet café though :)

When we got back Ana had a Nidra Yoga class with us, it takes around 30 minutes and it puts your body down to sleep but not your mind, so you feel like you have been sleeping for 3 hours instead. It was reaaally relaxing. After that we went up to one of the trulys that’s above in one hill and watch the sunset from up above there, so beautiful!

Panorama over the valley where we live

Later we had dinner and then, since it was fullmoon, there was a fullmoon party. It wasn’t really what I imagined, haha, but there was a lot of singing and dancing in the temple together, more then other days. But it was beautiful.

Dancing in the temple

At night I sat down by the beach and watched the full moon for a few hours. Beautiful! And it’s not cold at all to be outside at the beach at night, I think it’s because the hills around so it’s wind still.

The welcoming at the party, a big cs-flag and the cs-bracelets!

Me and Samuel during la hora loca! 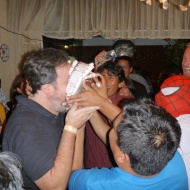 In the face! haha.

Some couchsurfing people and a clown :)

Panorama over the park

Parque de los enamorados, I think the father there running after the kids is quite funny.. haha 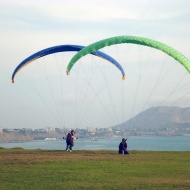 I would love to try this some day!!!

I like the contrast of buildings and parks… its so futuristic here..

With anthony, my brother at the hostal :) Doing some videos! 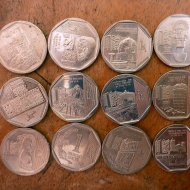 Anthonys collection of Soles, they are special edition! Beautiful! 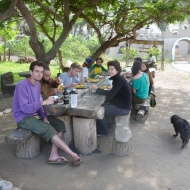 Breakfast at Eco Truly Park with volunteers and devotes… yummy!

The temple from outside

Walking in to the ”city” which really wasnt a city… 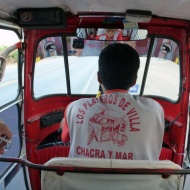 Tuk tuk! Hehe. So cute. It costs 1,5 soles to get to the closest town. 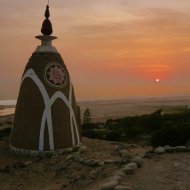 Francesco, me and Amy during sunset

Didac and Francesco and the kids playing with their phones